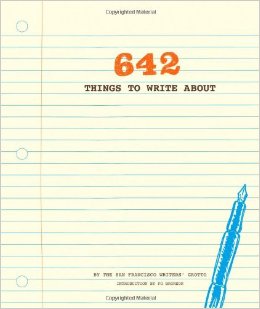 As I write in this I will transcribe selected pieces here.

Buy your own copy on Amazon

2) The worst Thanksgiving dish you ever had

Aunt Joanne’s green-bean casserole wasn’t notable for how good, or even how bad, it was, but because invariably at every Thanksgiving she would recount how she had been given the recipe by a Chinese woman in Paris one summer she had lived there during her years at college. This would, just as invariably, send my Aunt Leanne into a frenzy as she was always eager to accuse her sister of making up the entire absurd account to cover up the fact that the real source was a microwaveable recipe that used to appear on the cans.

3) A houseplant is dying. Tell it why it needs to live.

Look, we both know your current state is my fault, I won’t try to deny it, but perhaps if you had been more interesting – by sprouting flowers or eating insects – the thought of tending to you wouldn’t have been so tedious. The thing is, though, if you bite mom and dad will never agree to get me a puppy, so you’re going to have to pull through. I’ve seen the way you look at the orchid, and it sure would be a shame if anything was to happen to him, so accept this sun and water as my half of the deal and stop wilting!

5) You are an astronaut. Describe your perfect day.

Evans had the safety cover off the self-destruct panel as each of us held our cyanide pills at the ready, the sound of our pounding heartbeats drowning out the normal din of sensors and equipment that filled the shuttle’s cabin as we waited for the first alien race humanity has encountered to attack or establish first contact. After years of meticulous and eventually successful worm-hole technology testing my crew of eight had been chosen to be the first manned flight. Though all of us had entertained, and perhaps even longed for, the possibility of encountering intelligent life on the other side of galaxy, I doubt any of us really believed it would happen, let alone on our first jump, but that’s exactly what happened. Despite it’s unlikelihood, this, like all other scenarios, had been considered and planned for. We had to be prepared to take extreme measures should whom we encountered proved to be hostile and might pose a threat to Earth should we and our information and technology be captured. However, instead of having to sacrifice our lives for the greater good of humanity, we’ll be remembered as the first emissaries to new and greater shared experience in the vast loneliness that had been space up until this moment. I can’t imagine anyone is ready for what lies ahead, but I, my crew, and I’m sure countless others, are eager and exited to step into our new shared future.

6) Tell a story that begins with a ransom note.

It’s been five years since we received the ransom note written in letters cut out of a magazine just like they do in the movies. It demanded the oddest combination of things: one thousand packs of cigarettes, an expensive bottle of aged whiskey, a thousand dollars, twelve audio books, a stand mixer, eight video games, a designer purse, and a long list of medications, most of which I had never heard of. There was a picture too, of a single bullet sitting upright on a table next to its gun. It was the one they said he (we all agreed it sounded like a man writing it) would use on Stephanie if we didn’t “pay up” in five days. But here’s the thing, neither my husband nor I know anyone named Stephanie. Everyone – police, government, regular people, and even the FBI – looked high and low for someone missing by that name but couldn’t find a match anywhere in the whole state. They even put it in the news and in the papers that the police wanted to get in contact with the guy to sort out what was going on. They never heard from him again, and they never found him or Stephanie. They’ve speculated that it might have been a prank; or the delusion of a guy who finally got on his meds and forgot that he had ever written the letter; or maybe even someone just hoping to confuse and scare his way into some money. I really hope they’re right, but every time a girl ends up dead I check to see if it’s Stephanie, shot and discarded. I just can’t seem to shake that worry for her, even though she’s probably not even real. Even though my doorstep may have been random or wrong, the fact that it did land on mine makes me feel responsible for her. Some days I even worry that – and I barely like to even entertain the thought let alone voice it – he might still have her, and I sometimes find myself crying thinking what he might be doing to her. My husband and friends all kindly tell me that I’m foolish for worrying about things that aren’t even likely to be real, and are entirely out of my control even if they are. I know they’re right, still, I suspect I’ll think about Stephanie and that ransom note until I haven’t got any thinking left in me.