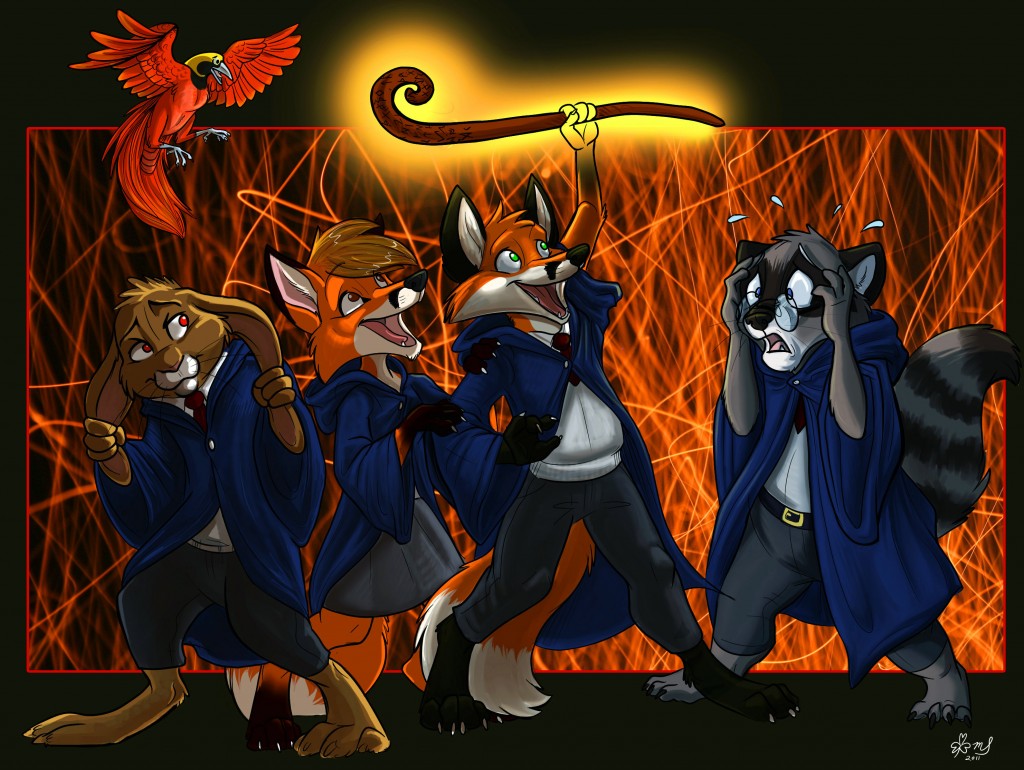 Hear it read on The Voice of Dog!

“Antoine, no!” protested Greg. The stout raccoon looked to his other friends and classmates for support through wire-rimmed glasses. “We’re going to get into trouble.”

“Don’t you mean more trouble?” asked the brown-and-white hare sitting at his desk with a bored expression.

“See? Vincent agrees. We’re already in detention. If Professor Dalton comes back and you’re messing around with the training scepter we’re going to get expelled!”

“Don’t be such a spoilsport,” said Aryana, the red-furred vixen seated next to Vincent. “No one is getting expelled.”

“Fun?” Greg scowled at Antoine. “There’s nothing fun about this much detention.”

Antoine grinned. “Adults never want you to have fun because they want to keep the magic all to themselves. Besides, it’s the training scepter, right? Let’s just call this…practice. They won’t find out if no one tells them.”

“But they always find out!” whined Greg. “That’s why we’ve been in detention every day this week!”

Antoine peered deep into the ornately carved open spiral at the top of the wooden scepter, trying to decipher the stored spells held within its curved length.

“It’s not my fault we tossed Duncan out the window instead of pushing him out of his chair,” mused Antoine. “I need to work on controlling my power, and he shouldn’t have been calling me ‘ant-faced Antoine’.”

“Find anything cool?” Aryana’s ears perked forward, looking expectantly at Antoine as she brushed aside sandy-brown strands of hair. “Anything they’ve kept from us?”

Antoine, transfixed, spoke as his green eyes hungrily hunted through the scepter. “Yeah! Wow! There are so many spells in here that we haven’t gotten to yet.”

“Is there anything in there that unlocks stuff?” asked Aryana, leaning over her desk with paws planted, nearly striking Vincent with her tail as it whipped back and forth. “You should break Squawky out.”

All eyes turned to Glendencal, the unruly, brightly-colored bird-of-paradise who shifted nervously on his perch at the sudden attention.

“Hmm. I know I saw something like that. Give me a second and I’ll find it again.”

“No. Antoine, no!” the raccoon’s voice squeaked. “How could Professor Dalton not find out if you let his familiar out? That cage is magically sealed.”

“You worry too much,” chuckled Antoine as he pulled back the billowy white-and-blue sleeves of his academy robes and took aim at the cage. “I’m a natural.”

“Vincent!” pleaded Greg frantically, “You’re the oldest. Do something!”

Vincent grumbled and his listless expression returned. “I’m only a year older than you all and we’re all in the same year. What am I supposed to do, beat him over the head with that extra year? Besides, I am doing something.” Vincent pulled his ears down over his eyes and held them there. “I’m establishing plausible deniability.”

Glendencal stared at the end of the outstretched scepter as Antoine spoke the incantation. The cage glowed and bulged violently.

“Everyone get down!” shouted Antione.

They all ducked just before the cage shattered and its remnants were hurled outwards in all directions with a thunderous crash, freeing the squawking bird within.

Aryana shot her paws into the air. “That was amazing!”

“Is it over yet?” asked Vincent from behind his ear.

“What did you do! They’re going to skip the expulsion and go straight to the executions!” sputtered Greg.

“Still too much power,” lamented Antoine as he stared at the scepter, his ears splayed back in disappointment.

Greg, stricken, ran up to Antoine, grabbed him by the shoulders, and shook him. “Do something to fix this! Now!”

“Alright, alright! No need to start shedding, jeeze. Aryana, still Squawky while I find something to fix this.”

“My pleasure,” said Aryana as she locked her gaze on Glendencal as he flew erratically overhead. Narrowing her eyes, she slowly brought her open paws closer and closer together as she mumbled the stilling incantation. With a resonating clap, she brought her paws together in a burst of green light which halted the bird’s motion mid-flight, leaving him frozen and floating through the air.

“Done and done.” Aryana dusted her paws in satisfaction.

“Uhh, bad news, y’all,” said Antoine, “I can’t find anything in here that can put the cage back together.”

“There’s got to be something,” said Greg on the verge of tears. “Look harder!”

Antoine rolled his eyes, but turned his attention back to the scepter, scanning through the stored spells until he found one he didn’t recognize.

“Any idea what a con-flag-ration is?” asked Antoine.

They all shook their heads.

“Whatever it is, just try it,” said Greg. “Professor Dalton will be back soon.”

“Alright, here goes.” Antoine gripped the scepter tightly with both paws and stared down his muzzle, focusing so as not to overdo it again. As he exhaled the single incantation word the intricate spell segments aligned just as Antoine had shaped them in his mind and fire erupted from the coiled wood.

Everyone’s eyes went wide, the burning light raging within each fearful orb. With a yelp, Antoine dropped the scepter and pawed wildly at the flames that clung to his robes. Greg ran screaming around the room with his tail-tip ablaze. Aryana scurried under her desk to get out of the way of the flames. Vincent, sighing heavily, combed back his ears and rushed over to the fire with a commanding expression.

The hare held one paw palm up, circling the other above it. Blue and white trails of light formed and followed the motion of his paw, transforming into rings of water and clouds that pulsed with energy. Vincent pulled back his paw and held it like a spear before jabbed it up through the center of the rings as he shouted the incantation. Dark billowing clouds erupted from the rings and rushed up and out across the ceiling. A moment later a torrential downpour began, dousing the flames and drenching the entire classroom before dissipating.

Aryana came out from under the desk and inspected the room. “That. Was. Awesome! Do it again.”

“What’s wrong with you!” Greg shouted at all of them through tears, hugging his scorched and soaked tail-tip to his chest.

“Oh you’ll be fine, ya big kit,” scolded Aryana, splashing her way over to Greg. “Have a sense of adventure.”

The raccoon tested his furless tail-tip and instantly withdrew his finger with a loud whimper. “Why don’t you have a sense of not being insane!”

Aryana just smiled at him. “You need to work on your come-backs. Now hold still.” Aryana held her paws over Greg’s tail and chanted quietly. His tail-tip glowed with a white light as the skin turned from red to pink and the fur regrew until it was full once again. Greg grudgingly thanked her while Vincent wrung the water from his ears and Glendencal tried to shake himself dry.

Aryana turned to Antoine. “So what do we-” Her words were cut off by a burst of air dryer than the sun-turned side of a desert rock. As the gust subsided she was taken by a coughing fit, her throat bone dry.

“It worked!” exclaimed Antoine excitedly between his own coughs. “I interweaved the fire spell with one of the wind ones we studied last week. Greg. Vincent. Hold still.”

Thrice more Antoine cast the spell and hacking coughs filled the room as his friends ceased to drip. The residual water finished leaking through the slat-wood floor into the ground beneath as Greg scooped the disoriented bird-of-paradise up off the floor.

“I got Glendencal!” said Greg, holding him up.

“Good going!” said Antoine. “Keep a hold of him while I try to find something that will actually work.”

Greg struggled to keep his hold on Glendencal while Vincent and Aryana busied themselves with taming their fur. Antoine returned to the scepter, brow furrowed, as he searched its spells.

“Hey guys!” shouted Antoine, bouncing excitedly. “I think I’ve got it. The most complex spell in here is rife with talk of reversal.”

Even Vincent looked curious as they all crowded around the scepter.

“Does anyone understand this?” asked Antoine. “I can’t make out any of it.”

“Me either,” admitted Aryana, scratching behind an ear.

“Well, I understand parts of it.” Greg pointed to a layer of ethereal runes that floated on the surface of the scepter. “See these? Those two are the symbols for the metallics and organics of earth, and those three there are their binding, essence, and alteration segments. And the sets of runes in this layer underneath are each powerful channels that allow their segment sources to flow in reverse. I’m not sure what the rest of it is, exactly.”

“Are you sure this time?” asked Greg worriedly.

The rest of them shrugged. Antoine wagged with a grin.

Greg sighed and rubbed his forehead. “Alright, but let me do it. I’m better at this type of magic.”

Greg, handing off Glendencal to Vincent, gathered his strength and began the spell’s incantation. As the spell progressed each of them could feel the room swelling with its energy until it made them uneasy. With the last words out of Greg’s muzzle the spell reached its zenith with a sound like a great snap that echoed out into the distance.

For a moment each was sure the spell had failed, then everything in the room slowly began to move, even them! Panicked shouts escaped their muzzles as they were swept up in the flurry of motion.

Aryana laughed. “This is awesome! Look at me!” She mimicked swimming as the magical currents carried her.

The classroom door opened wide, and from his inverted vantage point Antoine saw an upside-down Professor Dalton staring back at him with a raised eyebrow and an unfavorable expression. Antoine thought he caught the venerable wolf grinning when he snorted, but he couldn’t be sure.

Professor Dalton snapped his fingers and the training scepter appeared in his paw. He studied it as the churning chaos continued.

The wolf raised his eyes and scanned the room. “Perhaps in a moment.”

Books and equipment returned to their shelves if still wet and burnt and in a bit of heap. Desks and chairs righted themselves and each student was violently thrust into one with a groan as they connected. The whole classroom returned to where it had been when they began, just worse for wear. Even Glendencal’s cage was back together, if bent, with him in it. Professor Dalton walked calmly to the front of the room and sat behind his desk, eyeing his students who wouldn’t return his gaze, their muzzles down and ears laid back. Lifting his paws, Professor Dalton repeated the spell they had tried, but without the training scepter, righting and mending everything their attempt had failed to.

“Advanced spells drain a great deal of charge from the training scepter, which is expensive to replace quickly. You will spend each evening this week, and next, here charging it, starting now.” He looked at each of them in turn. “You must be very dedicated students to be here so often.”

It was a while before anyone felt comfortable enough to look up, and even then their guilty silence persisted until Greg broke it.

“Well, we should probably get started.”

Antoine stared at the training scepter, a sly grin working its way across his muzzle.

“Antione, no, please! We’ll never get out of detention!”