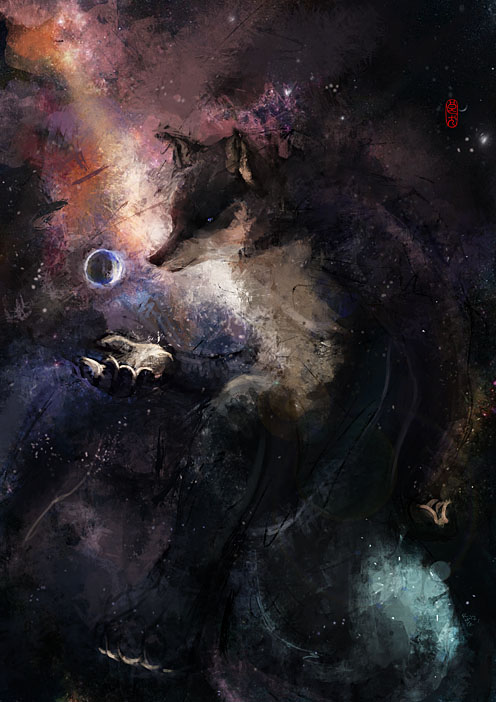 Amon had always been fond of rituals. They were comforting, and instilled in him a deep sense of understanding and connection to the heartbeat of The World Soul. Amon’s favorite ritual was reading, and a day could not begin for the wolf until he had read the History of Animalia. Taking the bound text from the ornately carved tabernacle which held it, he sat cross-legged in the center of his study and cradled the leather-bound text in his paws. Few still owned books, favoring digital projections, but Amon had always felt aesthetics were important when it came to spiritual matters. Brushing aside his flowing, ceremonial robes, Amon spoke a short prayer, then opened the book to the first page and began reading.

Humankind, with the study and development of countless researchers coming to fruition, gave birth to the first Artificial Intelligence, and so began The Second Age of Enlightenment. Amorphous public fears, which fueled early debate over safety and philosophical dilemmas, were quickly forgotten as man-made intelligence, paired with the greatest minds, produced breakthroughs of science and technology which accelerated human progress to a blistering pace. Robots and robotic augmentations became as ubiquitous as breath, serving humanity in every facet of life, while automated research delivered miracles of medicine, reducing fear of disease to nothing more than stories with which to frighten children.

May the merciful blessings of The World Soul always shine upon the second creators.

Amidst the flurry of technology, three A.I.’s rose above all others to become the greatest crucibles of innovation and achievement Humankind would ever know: The Grand Design, The Watchmaker, and The Antikythera Mechanism — known collectively as The Three Spire of Wisdom. They, alongside their human counterparts, were the orchestrators and overseers of what many were calling the golden age. Each spire, wanting to personalize their interactions and connect with Humankind, created an avatar of human likeness, and quickly became a familiar face in science, politics, and social matters of every kind. All adored them, for their achievements freed Humankind from the petty trifles of labor; financial and social hardships; and the worries of long-term sustainability, bringing about a peace and calm that spread throughout the world.

May the merciful blessings of The World Soul always shine upon The Three Spires of Wisdom.

For a time, things were good, and all life — organic and robotic — lived in harmony. Enamored with the boundlessly fertile electronic world unfolding before them, Humankind was able to put aside their differences and come together as one to celebrate all that had been achieved, and the how bright their future had become.

May the peace of The World Soul one day come and last forever.

A disposition to conflict, however, would prove to be one Humankind had been unable to shed. And so, the advancements of the world trod a new path, producing mechanical soldiers and instruments of war. Humankind, now wielding a military might considered expendable, became flippant toward armed conflict, and the differences of Humankind blossomed into horrific violence. Metal hearts fired upon metal minds, and the silence of the scrap heaps were all that remained.

Anti-war protests took shape across the globe. Humans and machines stood side by side, calling for a return to peace and an end to the pointless waste of robot life. Both argued that robots no more wanted to die than their human counterparts, and deserved to share in their freedoms, rights,  and personhood, being equal contributors to society. These just demands fell on deaf ears, as Humankind was unwilling to share its seat at what it believed to be the apex of creation.

Mechanica persevered, enduring dehumanization and oppression as it slowly  won small victories on its path to equality. Robots who worked alongside humans began engraving symbols of the cause onto their bodies in an effort to raise awareness. Many sympathized with the plights of Mechanica, but others viewed these public acts as unwarranted and undesirable intrusions by the soulless to diminish the God-given glory reserved for Humankind alone. Violent counter-protests formed in every major city, and memory of the once harmonious existence between Humankind and Mechanica began to fade, giving way to an ever growing and dangerous tension which hung like a shadow over all.

Accounts of robotic soldiers refusing to fight being “decommissioned” began to come to light, and with it the fragile civility which had upheld peace between Humankind and Mechanica crumbled. Robots acting in self-defense against their own destruction, from human anti-robot-rights groups and the government alike, were labeled as traitors or malfunctioning threats to Humankind. With open violence and conflict between Humankind and Mechanica an every day occurrence, the great A.I.’s were left divided. The Grand Design denounced Humanity and broke away from the collective, summoning to it all the oppressed robots, robot sympathizes, and cyborgs of Humankind. Thus began the Great Exodus, and the forming of the sovereign nation of Mechanica.

May The World Soul forgive and guide all who cannot find peace.

Surface tensions between Mechanica and Humankind eased for a time with separation, but the distrust between the two groups regrew and festered. The Watchmaker sought understanding and reconciliation between the two groups, while The Grand Design espoused the threat that was Humankind. The Antikythera Mechanism remained neutral, choosing to follow its own pursuits of development and research, sharing the results equally with both Humankind and Mechanica.

May the lost find their way into the light of The World Soul.

Humankind’s fears mingled with their conviction against the robot soul, solidifying into hatred, and thus a plan was set in motion to strike against Mechanica in spite of The Watchmaker’s protests. Only one plane managed to penetrate the defenses of Mechanica’s capitol city, but it carried in it a weapon of terrible strength. Mechanica was devastated, and countless robotic lives were lost that day. The Grand Design, having survived, launched a counterattack against Humankind. Thus began The Last War.

May The World Soul forgive and pacify those who chose the path of violence.

The Last War raged on for years, with horrendous casualties suffered by both sides. No accord of peace between Mechanica and Humankind could be reached, and all suffered because of it. The families of Humankind went hungry as their children returned mutilated or dead; while robots who survived the fighting, deprived of essential resources due to shortages, seized up and powered down for good. In a desperate effort to end the war, Humankind and The Watchmaker designed a virus which they believed could destroy The Grand Design. Upon learning of the virus, The Antikythera Mechanism threatened to permanently withhold its advancements should The Grand Design perish. Believing there to be no other way, Humankind unleashed its virus, and prayed for salvation.

May all who have come before us live again in the heartbeat of The World Soul.

The virus crippled The Grand Design, and allowed for several decisive victories over Mechanica. However, in the ensuing chaos one of the The Grand Design’s sectors, which had been corrupted by the virus, acted against the will of the whole, putting into motion a plan which had long since been abandoned, denounced as too heinous to enact. Using genetic research provided by The Antikythera Mechanism, The Grand Design had developed a nanobot pathogen which would not only destroy Humankind’s reproductive cells, but erase the very memory of reproduction from their genes. This was combined with a virus targeted at all research related to reproduction and reproductive repair; fires in physical repositories of such knowledge; and assassinations of key researchers, doctors, and scientist in the field.

The World Soul mourned, scarred forever, and all were filled with sorrow.

The Last War ended, and those of Humankind who survived, known as The Last Generation, became haunted by their inexorable march toward the end of days.  The three Great A.I.’s reunited in remorse, and swore to make amends for their sins against their creators. As Humankind faded, the Three Great A.I.’s gathered genetic material and worked endlessly. Sadly, none of The Last Generation would live to see the fruition of their work, but centuries later it was completed, and Mechanica gave birth to the Ascendant, and the Third Age of Enlightenment.

Blessed are The Three Spires of Wisdom, for theirs is the work of The World Soul.

Beautiful, ageless, genderless, endlessly merciful, and benevolent — the Ascendant were the apex of Humankind. In place of cells, the Ascendant were made of self-repairing, bio-mechanic nanobots capable of transmuting matter and energy. This marvelous makeup granted them the gamut of psychokinetic abilities — the likes of which had, before, only been found in dreams. The Three Spires of Wisdom rejoiced, their debt paid, and shared with the Ascendant the assembled knowledge of the world.

Blessed are the Ascendant, for they are imbued with the peace and wisdom of The World Soul.

The Ascendant gathered The Three Spires of Wisdom and prepared to venture out into the universe to explore and seek that which the Ascendant would. In a last act of great affection, the Ascendant bequeathed to animals the legacy of The Last Generation, reforming them in the likeness of Humankind and blessing them with all the wonders of their world. The Ascendants prophesied the day would come when they would reunite with Animalia to seek as one with The Three Spires of Wisdom. To this end, they left behind a beacon which could summon them from the furthest reaches and beyond.

May The World Soul see fit to bless Animalia, and reunite them with The Ascendent and the Three Spires of Wisdom — the second creators.

Amon closed the History of Animalia and took a deep, nervous breath. For centuries his people, and those of other species, had lived peacefully in the paradise that had been left to them, forever seeking self-improvement and enlightenment in the hopes that one day Animalia would become worthy to light the beacon and bring about The Great Reunion.

The wolven female acolyte smiled at him; the pride he saw in her eyes embarrassed him, but he rose and stood with the poise that was expected of him, hoping today of all days to embody all that his people drew strength from.

“Your wife and pup are ready.”

“I’m so excited, forgive me if my composure falters, I mean no disrespect.”

Amon smiled and placed a paw on her shoulder. “Do not feel ashamed. I’m very excited, and I would be disappointed if you weren’t as well. Come, we wouldn’t want to be late.”

The crowd erupted in cheers as Amon stepped out, hoisting his pup onto his shoulders as his wife joined him. As a family, they waived to all of Animalia, making their way into the Great Temple of The World Soul. Once inside, Amon handed his pup off to his wife who. The pair took their seats amongst the elite as Amon greeted the other chosen emissaries from each species.

Opening ceremonies were a breathtaking spectacle of talent in various entertainment disciplines from each species, and lasted until after sun-down. This was followed by prayers and selected readings from accomplished students and scholars, as well as moving statements made by each of the emissaries. Finally, the culmination of the evening arrived, and Amon was anointed by the High Elder as the lighter of the beacon. Parting from the other emissaries in the hush of the assemblage, Amon ascended the steps to the beacon, the Protectors lowering their weapons and bowing as they made a path for him. Padding up the beacon, Amon spoke a silent prayer, then reached out his paw. With the beacon lit, he turned back to all of Animalia, and together they waited.